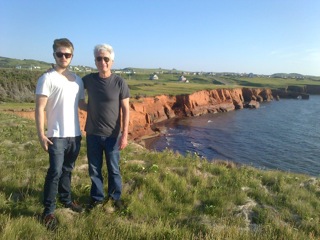 I have played many times (since the 70’s) on the beautiful Magdalen Islands, a small archipelago in the Gulf of Saint Lawrence, closer to Prince Edward Island but part of the province of Quebec. It was the first time that my son & daughter, Eli & Hannah had ever been there and we played a concert at a wonderful theater/cabaret, Pas Perdus. The crowd was filled with many of my old “Madelinot” friends. We rocked the place and had a mini vacation. That’s hard to beat!!