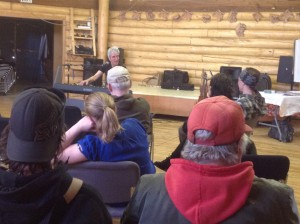 Dana Linkleter was the coordinator and took us up the mountain on his snow machine to view the territory and marvel at the silence. The day was brilliant. 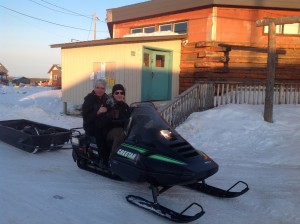 Old Crow is renowned for its fiddlers and the school kids were enthusiastic during the concert in the school atrium after which we bundled instruments into the sled behind a Ski Doo and scooted over to the community hall to set up for evening. We had a good crowd and the next day the whole town knew who we were and had lots of warm smiles and handshakes.

Old Crow is also well known for their beading and sewing and after the concert Alan was gifted with a beautiful pair of gloves. Thanks OLD CROW!